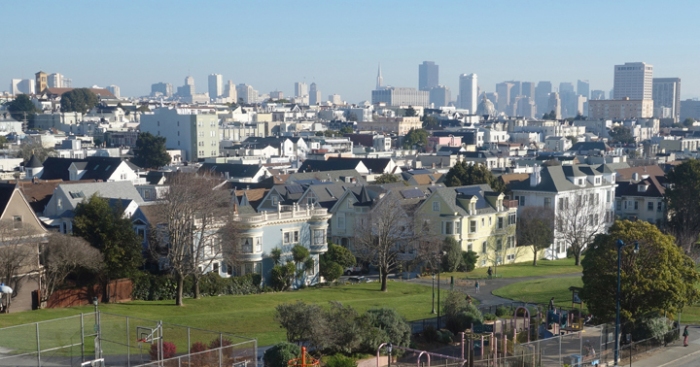 Friends of Duboce Park is a non-profit organization started in 1997 by a group of neighbors in the Duboce Triangle and Lower Haight who love and use the park. Since then, we’ve grown quite a bit and we’ve accomplished a lot. We provide regular cleanup and maintenance for the Park.

We’ve raised the funds to build a new playground (2000), install new lighting along the pedestrian path (2003), build a park bulletin board (2003), build a labyrinth on Scott St. (2007), and helped complete a youth play area (2012). We’re currently working on improving the corner at Steiner Street and Duboce Avenue. We’ve hold an annual Tag Sale to raise funds for park improvements and have host free movie nights in the park, featuring films set in San Francisco.

We’ve held a Play Day in the Park/Pictures with Santa and had a Centennial Celebration for the grand opening of the playground. We’ve been instrumental in obtaining a new irrigation system for the park and a Toro cart for gardener use and for volunteer days. We’ve served on various Task Forces: Harvey Milk Recreation Center for the Arts Renovation Task Force and Dog Play Area/Multi-Use Area Task Force. We are always working with SFPD’s Park Station to improve safety and reduce crime in and around the park.