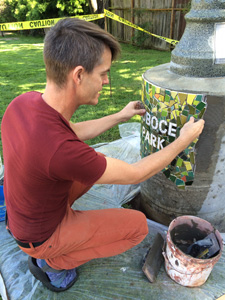 Believe it or not, there used to be no signage on Scott Street identifying the eastern side of the street as part of Duboce Park which includes the Rec Center, Labyrinth, and grassy areas. To remedy that situation and turn a drab concrete pillar into a work of art that directs people to the various parts of the park,  artist Blake Sherlock installed a colorful mosaic piece in early October to surround the concrete pillar that supports the light pole located at the top of the passageway between the Rec Center and Carmelita Street.

As you walk south on Scott Street toward the Rec Center, you are greeted by a smiling Harvey Milk pointing the way to the “Rec Center.”  Walking north, there is a colorful ball and arrow that directing you to the “Play” areas of the park – the Playground, the Youth Play Area, and Dog Play Area. As you walk west up the passageway, there is a labyrinth with an arrow pointing right towards the site. That mosaic labyrinth in an exact copy of the table labyrinth on Scott St. As you walk past on Scott Street, a mosaic “Duboce Park” faces the street , providing identification for the park.

The artist, Blake Sherlock, has lived in San Pedro de Laguna on Lake Atitlan in Guatemala for the past ten years. Sherlock was raised in Boise, went to school at Brown and RISD,  and lived in the Lower Haight for a time in the mid- 1990s.  Sherlock designed and installed the mosaic work around the base and sides of the table labyrinth at the Scott Street Labyrinth, as well as the handicap access and No Skateboarding signs.  He led the mosaic tile workshop at the Tag Sale (and day after) in 2006 where neighbors created the 225 square tiles that now surround the labyrinth. The last ten tiles left over from that event are now on the top of the pillar piece.

The mosaic pillar helps connect the area with other parts of the park that also have mosaic work – the Labyrinth and the mosaic thrones in the playground. Sherlock said, “Over the years, I’ve had the pleasure of getting to know many of the neighbors who embrace and support the park…This mosaic piece is a labor of love for them, and very much a tribute to their community activism.”

“Mosaic for me is a metaphor for uniting disparate parts of our society, embracing differences to create one, harmonious whole. In no piece that I have created is that notion more heart-felt than in this one,” said Sherlock. “It is as if each shard of ceramic tile represents a resident of the neighborhood, and placing each piece is a metaphor for the neighbors coming together in the park.” 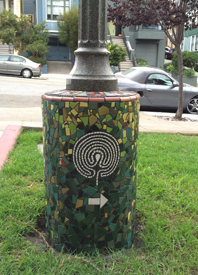