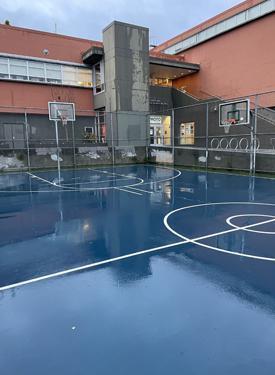 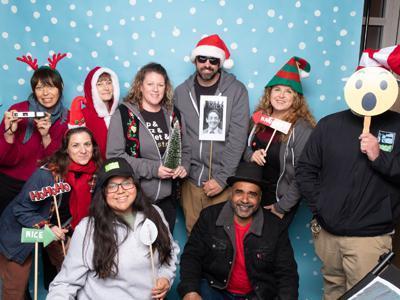 The Harvey Milk Center for the Arts hosted its annual Holiday Craft Fair on Sunday, December 11. Over 60 local artists applied for a space, but there was only room to showcase 32 artists.

There were two levels of tables of unique handmade gifts, arts and craft activities for kids in the Photo Center, and the always popular free Photo Booth in the main lobby. Those photos have been uploaded to the Photo Center website. 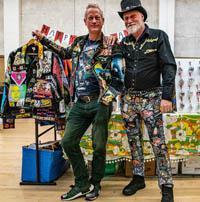 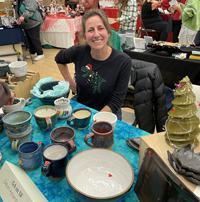 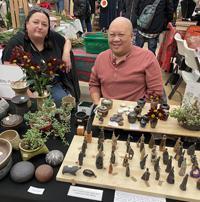 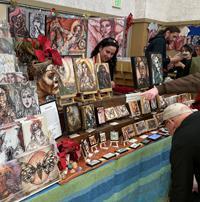 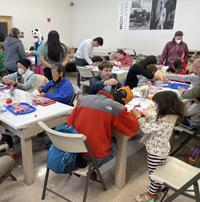 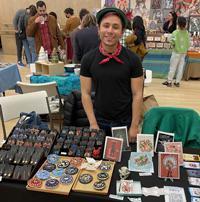 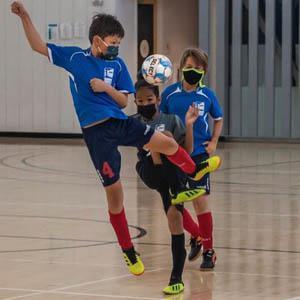 Registration for Winter activities, programs, and classes is under way offering courses for all ages: tots; youth; tweens & teens; adults; and, adults 55 and older. A complete listing of all courses, with descriptions, times, and costs is available online at sfreconline.org or in the 64-page catalogue available at the Rec Center or Photo Center.

You can register online at sfrecpark.org/register or call the registration hotline at (628) 652-2900. Rec and Park offer annual Recreation Scholarships to eligible, low-income individuals and families. Call Lillian Bautista, Scholarship Coordinator, at (415) 831-2717 for information.

The January 14 volunteer day has been cancelled since rain is expected to continue on that day. Our next volunteer day in the park will be Saturday, February 11, from 10 a.m.-noon. All gloves and tools are provided. Young children are always welcome! Even 30 minutes of your time makes a big difference in the appearance of Duboce Park. Our volunteer day is always the second Saturday of every month. Contact Rose at 415-255-8370 or rose@friendsofdubocepark.org for more information or with any questions or comments.

Volunteers spent a whopping 400,000 hours in San Francisco park and programs in the past year, an in-kind donation of more than $14.3 million to Rec and Park. The department hosted 7,214 one-time and repeat volunteers in San Francisco parks. More than 11,700 volunteer hours were provided by Greenager program participants, who live or go to school in the city’s northeast and southeast areas. 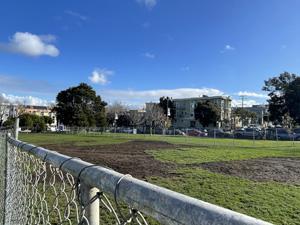 Much of the Dog Play Area was fenced off in December for three months for turf restoration. The closed area measures 12,960 square feet (that’s 1440 square yards or almost 0.3 acres). New sod was installed in that area and other areas in the park were aerated and seeded. All of these areas will need time to recover and grow. The Dog Play Area is scheduled to reopen on February 28. 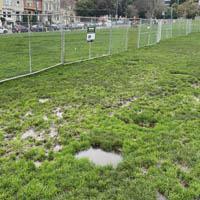 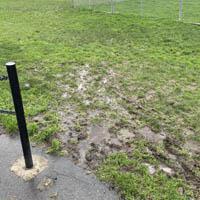 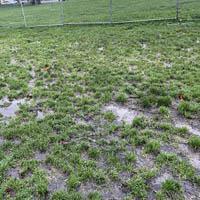 The atmospheric river that drenched Northern California definitely resulted in the park looking greener but many of those green areas have sprouted invasive weeds that are difficult to get rid of.  Other bare and brown spots turned to mud and slush and lawns remain saturated. San Francisco posted its second-rainiest day ever in over 170 years on New Year’s Eve and almost eight inches fell in San Francisco between December 30 and January 8. That’s just over an inch shy of the historic 9.26 inches of rain that fell between that same period in 1861-62.

Irrigation repair in the park is almost complete. Michelle Pallavicini, Park Services Manager, explained in a September email, “The Irrigation lines and valves feeding east from the Recreation Center down through the People Only lawn have been breaking one right after the other. We are having a difficult time getting the plumbers to make the repairs. This has caused the issues of inconsistent watering patterns. “

Rec and Park ordered a new slide to replace the missing slide in the Children’s Playground and it was supposed to arrive in December but was once again delayed. The crawling tube in the tot section has a crack and a replacement is on order. 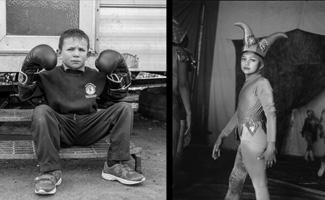 Swing by the Harvey Milk Photo Center (50 Scott Street) to check out the Nomadic Lives exhibit, on display through Saturday, January 14. Photographers Jamie Johnson and Norma I. Quintana chronicle the everyday lives of Irish travelers and an American one-ring circus.

Quintana is hosting an artist talk tonight, Thursday, January 12 from 5 to 7 p.m. at the Center.

As documentarians, both photographers capture their subjects by embedding themselves in the community. Jamie Johnson has traveled to Ireland several times to understand the customs of a people who live on the margins of mainstream society. Johnson won Photographer of the Year 2021 for her work with the Irish Traveller children. Norma I. Quintana spent a decade following the same circus troop, observing artistic roles and relationships evolve. The show continues through January 23. 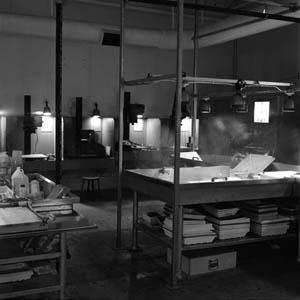 The next one-hour Photo Center Orientations are offered on January 14, 28 and February 11, 25. 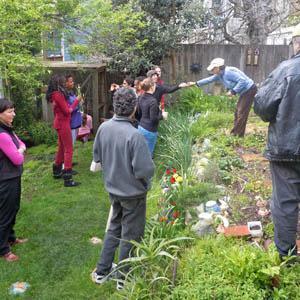 The SF RecPark Community Report 2022 reviews the accomplishments of the department in 2022 in our parks, pools, recreation centers, and gardens in all San Francisco neighborhoods and provides some interesting statistics.

More than 30,000 people were registered in 2,600 recreation programs. More than 10,000 fans came out to the World Cup watch parties in city parks. Rec and Park now manage 59 pickleball courts around the city. 1200 participants learned to swim. 25,801 hours of community gardening were proved to 7,796 adults through garden workdays, educational programs, special events, and workshops. 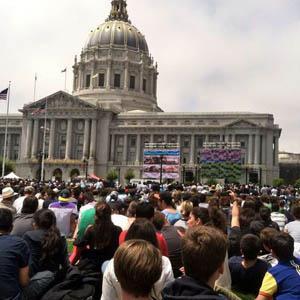 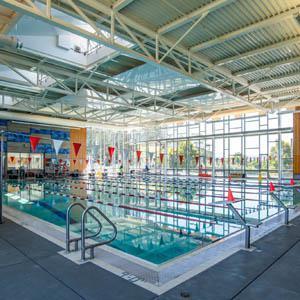 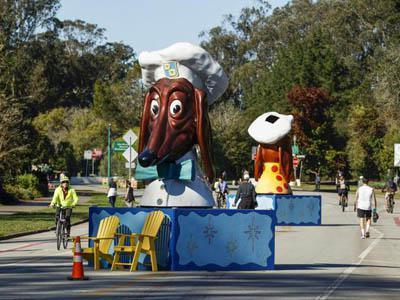 Voters have ensured the car-free JFK Promenade is here to stay. What was once a dangerous street has been transformed into a place for recreation, art, music, and human connection. The feedback from the long public process was invaluable, resulting in a more inclusive Golden Gate Park — additional blue zone parking, more frequent shuttles, a better connection to public transit, and more pickup and drop-off options. Rec and Park and SFMTA will continue to improve this dynamic space.

The San Francisco Board of Supervisors passed an ordinance to maintain the Great Highway between Lincoln Way and Sloat Boulevard as a car-free promenade on weekends until December 31, 2025, allowing for a three-year pilot study. This preserves the current schedule of closing the road to motor vehicle traffic on weekends beginning at noon on Fridays and ending at 6 a.m. Mondays, as well as on holidays.

Since the closure in April 2020, there have been more than 2.8 million visits to the Great Highway, including a record-breaking day in January 2021 that saw 11,600 visitors access the road in a single day. Pedestrians and cyclists visit the Great Highway from all 11 of the city’s districts. 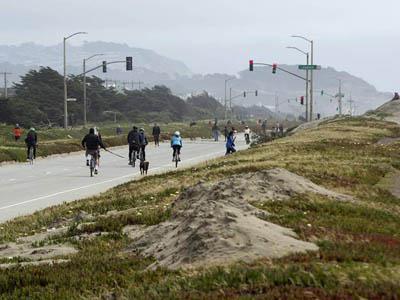 The San Francisco Board of Supervisors passed an ordinance to maintain the Great Highway between Lincoln Way and Sloat Boulevard as a car-free promenade on weekends until December 31, 2025, allowing for a three-year pilot study. This preserves the current schedule of closing the road to motor vehicle traffic on weekends beginning at noon on Fridays and ending at 6 a.m. Mondays, as well as on holidays.

The San Francisco Recreation and Park Department is ready to implement the plan approved by policymakers. The pilot would allow the department and SFMTA to collect more robust data on the Great Highway’s use as both a roadway and a promenade, as well as gather additional public feedback. Findings will be reported every six months to internal and external stakeholders. Ultimately, this thorough research will be used to make a recommendation to the Board of Supervisors for consideration on the Great Highway’s long-term future. For more information, click here. 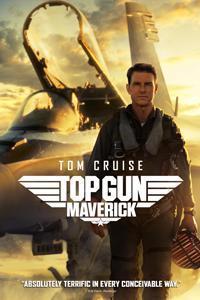 Save the date.  Movie Night returns to Duboce Park on Saturday, April 29 with Top Gun: Maverick. The 2022 action film is a sequel to the 1986 Top Gun with Tom Cruise reprising his starring role as the naval aviator Maverick. Top Gun was the highest-grossing film of 2022, grossing $1.487 billion, the highest grossing film of Cruise’s career. The movie will start around 8 p.m. when it gets dark. Friends of Duboce Park will once again have a refreshment stand with popcorn, healthy snacks, and cocoa.

Annual Membership dues for a Supporting Member are $25 per person and entitle you to voting privileges and participation in the governance of the organization. Your dues help cover the few costs we have, such as our website, newsletter, movie nights, and insurance.

Our Mission Statement includes the following: “to organize and represent the collective interests regarding Duboce Park; to beautify and promote safety within Duboce Park; and, to initiate and/or support beneficial neighborhood projects on behalf of Duboce Park.”